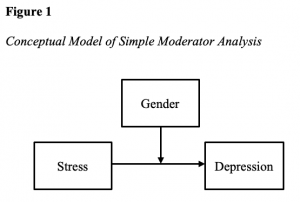 Note how in the example the variables are listed as are the roles of each variable in the study. Following this introduction, one should describe the preparation of the data and describe if the data are suitable for statistical analysis. Any violations of assumptions for the selected statistical test should be presented, along with how the violation was handled.

The data were screened and tests of assumptions for multiple regression were completed, as demonstrated in the Week 6 assignment, Regression Data: Screening Output Assignment. Although there was a minor deviation from normality for the residuals, the data were not transformed. Violation of the normality of residuals does not lead to issues with significance testing, particularly with larger sample sizes, and does not suggest any discrepancies with model coefficients should be anticipated. Instead, this violation may be an indication that a better regression model may be needed (Cohen et al., 2003). The tests of assumptions demonstrated the data are suitable for conducting the moderator analysis.

The remainder of describing the hypothesis test is to provide a summary of the outcome in terms of the research question. A word of caution: This is not an opportunity to begin interpreting the results in relation to the literature or theoretical framework. The synopsis should present enough information such that the reader can understand the meaning of the statistical results.

Presenting the results of hypothesis testing is a critical skill in research. The results represent the outcome of months, if not years, of hard work and provide the impetus for developing further implications and recommendations. To be effective in presenting these discussions, one must clearly articulate the results so the reader may understand the relationships between the variables, if any, and the magnitude of the effect. A well-written set of results is direct and succinct, presenting the results in an objective and academic manner.

Submitting the assignment
When submitting this assignment, you must first describe the assignment. The write-up should be descriptive of the variables and the activities used to screen the data, along with a description of the results, as described above. See the sample document for a model submission. All submissions must be a single Microsoft Word document. Do not submit the SPSS file.